This dress reminds me of a dress that I had in the 90’s. I wore it so often that I actually wore it out. It was so comfortable. There are a few differences such as the fabric was a little more lightweight, the tie went to the back and the dress length was a little longer. But for the most part, it looks just like it. I can’t believe that I accidentally recreated it!

Simplicity 9101 is a pullover dress which comes in two lengths. There is a choice between a drawstring waist or a front wrap tie belt. I made view C but instead of having the skirt a little shorter in the front, I made it all one length.

Fabric choices include chambray, challis, cotton or cotton blends, gingham, linen, and silky types. I chose a tropical suiting gingham for my fabric which is described as a lightweight woven material which is perfect for summer dresses.

You will also need 1/2 inch wide single fold bias tape. The bias tape is used to finish the neckline. I really like the way the neckline turned out. I made sure to press after each step. I also didn’t skip the understitching. I see how much of a difference that makes. The neckline came out so smooth and clean.

I don’t see myself wearing this dress anytime soon but I’m happy that I made it. The accidental recreation of my dress from the 90’s gave me the idea to look at some of my old photos to recreate my favorite dresses. We will see how that goes! 🙂

Until then, Happy Sewing!

Don’t you hate it when something doesn’t work out as you intended? Me too. But there’s always a bright side to this. You grow from it. You learn something new. You sometimes end up with something better. You become a better person. Wait… I’m talking about sewing, not life. You become a better sewist. (not to be confused with sewer: an underground conduit for carrying off drainage water and waste matter).

Sewist: Someone who sews. Sewer remains the dominant term, but sewist (combining “sew” with “artist”) appears to be gaining popularity, especially among sewing bloggers.

Back to the pattern review. McCalls 7936 is described as a loose-fitting jumpsuit or romper. It has a front invisible zipper, neckline facings and all-in-one sleeves. There are side seam pockets and an option to make a fabric belt.

I chose to sew up View A which is the short romper. It includes a fabric belt which I decided to sew as well. I chose a fabric that I bought from Downtown L.A. from a small store that sold fabric for $1.99 a yard.

This pattern is a Learn to Sew Level 2 so it’s easy to sew. The only problem that I had was with the invisible zipper. It wasn’t so invisible when I was done putting it in. So I did some research and read that if you sew closer to the zipper teeth, it might fix the problem. It didn’t fix the problem. It made more of a problem because I could not zip the zipper up. It’s possible that I sewed over the teeth. I managed to get very close to the teeth without using an invisible zipper foot. I used a regular zipper foot. It’s also possible that I may have melted the teeth because I ironed the fabric away from the teeth before sewing. I looked and it didn’t look like the teeth were melted. Either way, I had to figure out a solution.

After I took the invisible zipper out using a seam ripper, I had to decide if I wanted to try again with an invisible zipper. I didn’t want to try again. I decided to sew the front seams together and turn this romper into a dress. I did some research and found out how to turn shorts into a skirt. It was pretty easy and the dress turned out well. And the best part? It had pockets…

This would’ve made a great romper. But luckily, it looks great as a dress too. The only thing I don’t like is how the V neck is so low. It’s also a bit short, since it was intended to be shorts.

I’ve already started on my next project and it does not involve any zippers at all.

I also received the labels that I ordered from Dutch Label Shop. I was excited to sew one into my new romper turned dress. 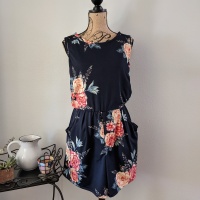 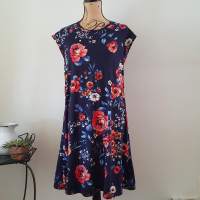