I found an article by Babble via Pinterest. It was called 21 things you can make with a tube of biscuit dough. Oh, yummy! I was mostly interested in the recipe for Extreme Monkey Bread (also at Babble.com):

And here it is:

STEP 2. Open the packages of biscuits, separate each biscuit and cut into four pieces.

STEP 4. Pour half of the caramel sauce into the bottom of a bundt pan which has been sprayed with nonstick cooking spray.

STEP 5. Place the cinnamon & sugar coated biscuit pieces on top of the caramel.  Pour most of the remaining caramel over the  top of the biscuits, setting about 1/4 cup aside for dipping, if desired. (The bundt pan will be verrry full.  If you don’t have a bundt pan, try splitting your monkey bread into two large loaf pans, the sort you’d use to bake loaved of bread).

STEP 6. Bake in an oven preheated to 375 degrees for 35-40 minutes, or until the bread at the top of the bundt pan is golden brown.  Allow to sit for 8-10 minutes before turning onto a plate.  Serve immediately.

Yeah, that does sound extreme. That lead me to a search of a simple recipe for Monkey Bread. I found one at Pioneerwoman.com

Monkey Bread at Pioneerwoman.com (click here for the full recipe):

Yes! Much more simple. Let’s try it! Okay, but I only bought one can of biscuits, they are the flaky ones, not the non-flaky ones and that just seems like a whole lot of butter. Oh, also I don’t have a bundt pan. So I adjusted the recipe into a mini monkey bread. I used the toaster oven since it was a smaller batch and placed it on the baking tray that came with the toaster.

Here’s my take on this recipe.

-Cut each of the buttermilk biscuits into 6 pieces (instead of quarters, since these are jumbo and 6 pieces seem more bite sized)

-Mix the sugar and cinnmon together in a gallon storage bag.

-Drop the biscuits in the bag. I gave it to my son to shake. Big helper! Make sure each piece has a coating of cinnamon sugar.

-Line the baking tray with aluminum foil and then I placed the biscuits on it. I pushed the dough down just a little bit so that there were no spaces in between the pieces.

-On medium heat, I melted the butter and brown sugar together. About 3 minutes.

-Once well combined, I poured the butter/brown sugar  mixture over the biscuits.

-Just like a bundt pan, turn the baking tray upside down onto a large plate. The butter and sugar will be nice and sticky and now on top!

I was looking for a way to store all of my family’s memorabilia. I usually keep tickets and memorabilia in a box, in a scrapbook or in an album. I wanted something different. Something that can be displayed, but minimally. I did some research on Pinterest and saw a pin that involved a family dropping their tickets and memorabilia into a frame as the years go by. The frame had a slit at the top. I thought this was a great idea.

I wanted to make a frame without having to actually cut a slit at the top since I knew that wouldn’t end well (hint: end in blood). So I did more research and figured out that a shadow box would be the way to go. I wanted to make a shadow box that involved one smaller frame and one larger frame and bringing them together. That way no cutting for a slit would be involved. This is how I came up with the idea for a ticket shadow box frame. I found an 11×14 frame and a 10×12 frame. They fit together perfectly.

Guess how much I spent?

I spent $0. I used 2 frames that I already had in my closet. Since I’m a scrapbooker, I already had the materials to make the background.

I had to figure out how to make a slit at the top without cutting. Since the smaller picture frame had a picture hanger attached to it already, I decided to move the picture hanger up to the very top of the frame so that when I hot glue gun the two frames together, the picture hanger would create a slit big enough to drop the tickets through. It worked!

3. Cut 2 strips to cover both ends to fully cover the 11×14 background

5. Use scrabble tiles (or pop up stickers) for texture

I did not put the glass back on this larger frame since I used the scrabble tiles. Also because I will be using the glass of the smaller frame only.

Next I applied hot glue all around the edges of the smaller frame so that I can apply that to the larger frame making sure that I keep in mind the slit for the tickets. 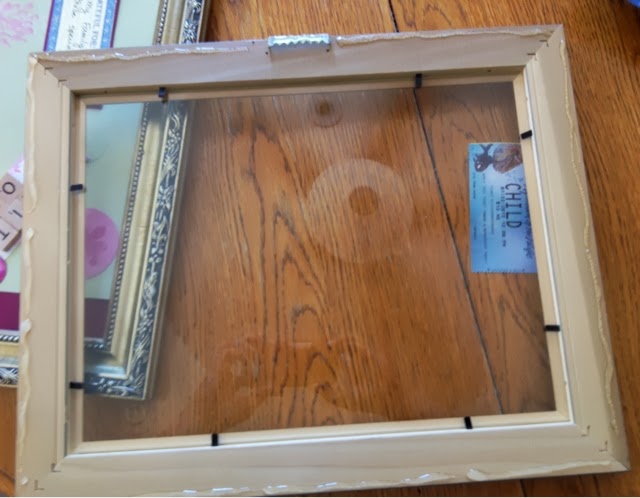 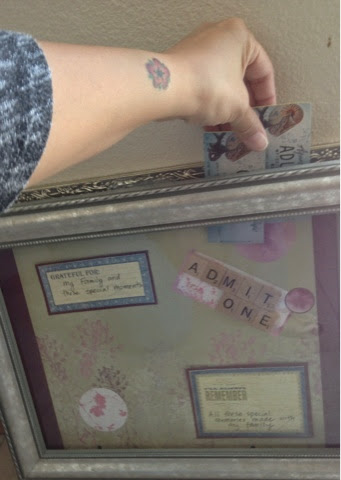 I was so happy that the tickets fit through the slit and that the slit was still thin enough that it wasn’t so noticeable. 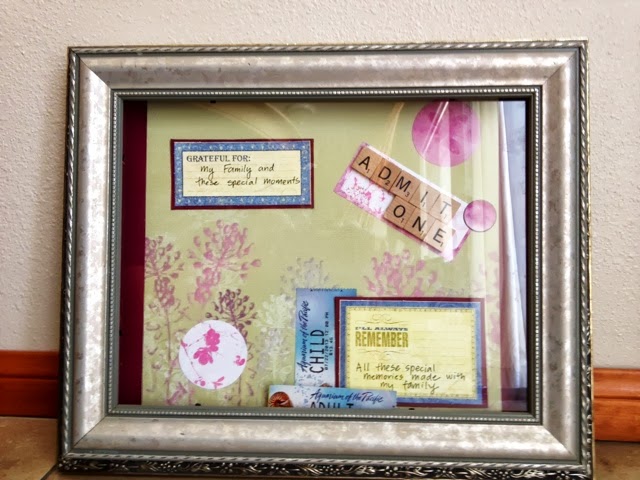 It will be fun to watch this shadow box fill up with our special family memories.

Today I am grateful for my family and these special moments…