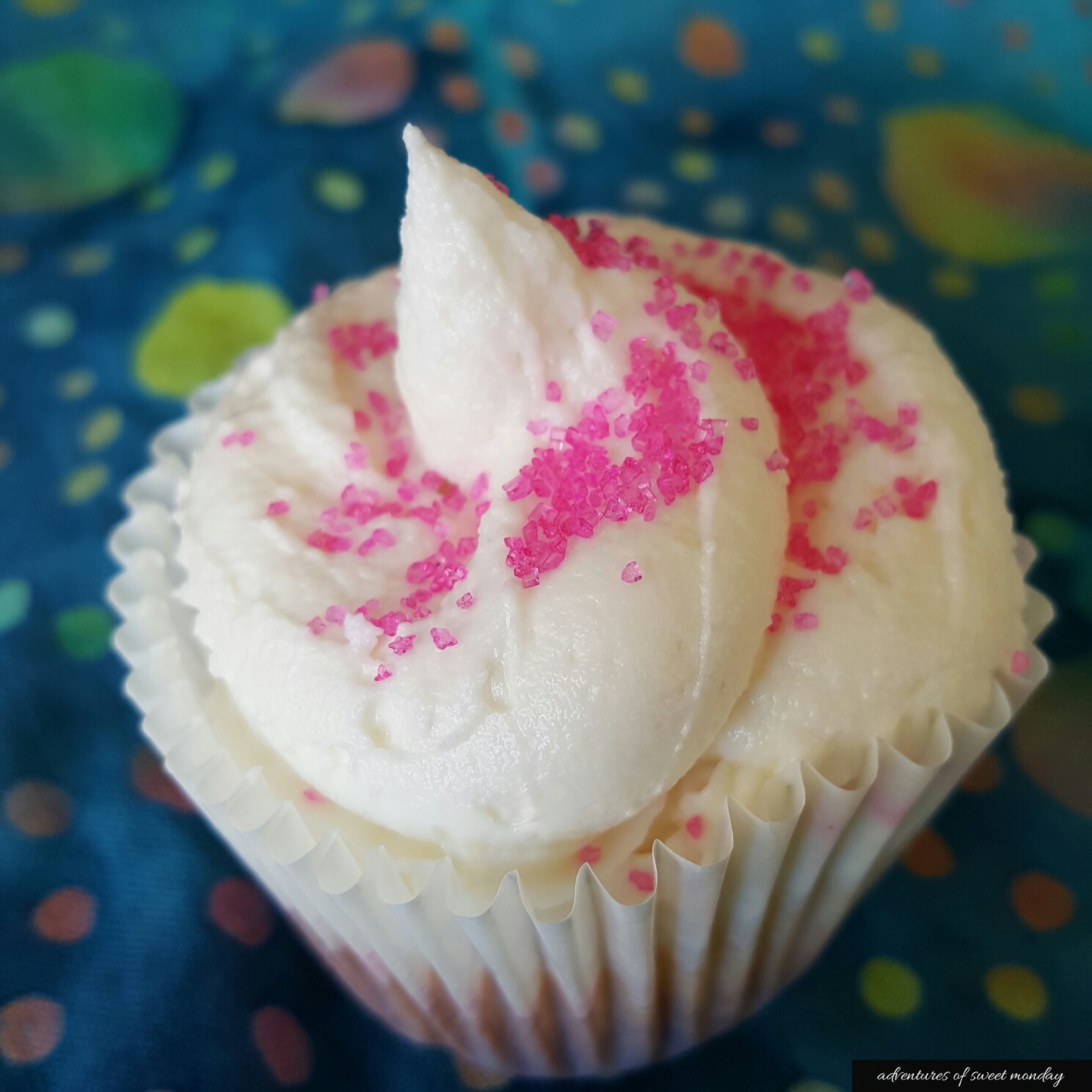 So let’s get started!

Here are the ingredients that you will need:

Preheat oven to 325 degrees. Line a cupcake pan with cupcake liners. I made mini cupcakes and this batch makes approximately 48 mini cupcakes.

Cream together the butter and the sugar until fluffy.
Add in the eggs and mix until well combined.
Add the vanilla and mix.
Add the flour, salt and baking powder.
Add one cup of sour cream and mix.
Fold in the white chocolate chips.
Fill each mini cupcake liner about ¾ full with batter.
Bake for 20 minutes at 325 degrees or until a toothpick inserted in the center comes out clean.

To make the white chocolate frosting, you will need:

Beat the butter for at least one minute.
Add vanilla extract and beat for another minute.
Add powdered sugar, one cup at a time, while beating.
Fold in the melted white chocolate. Add a little milk if the frosting ends up a little stiff.
Place in piping bag and pipe onto cupcakes. 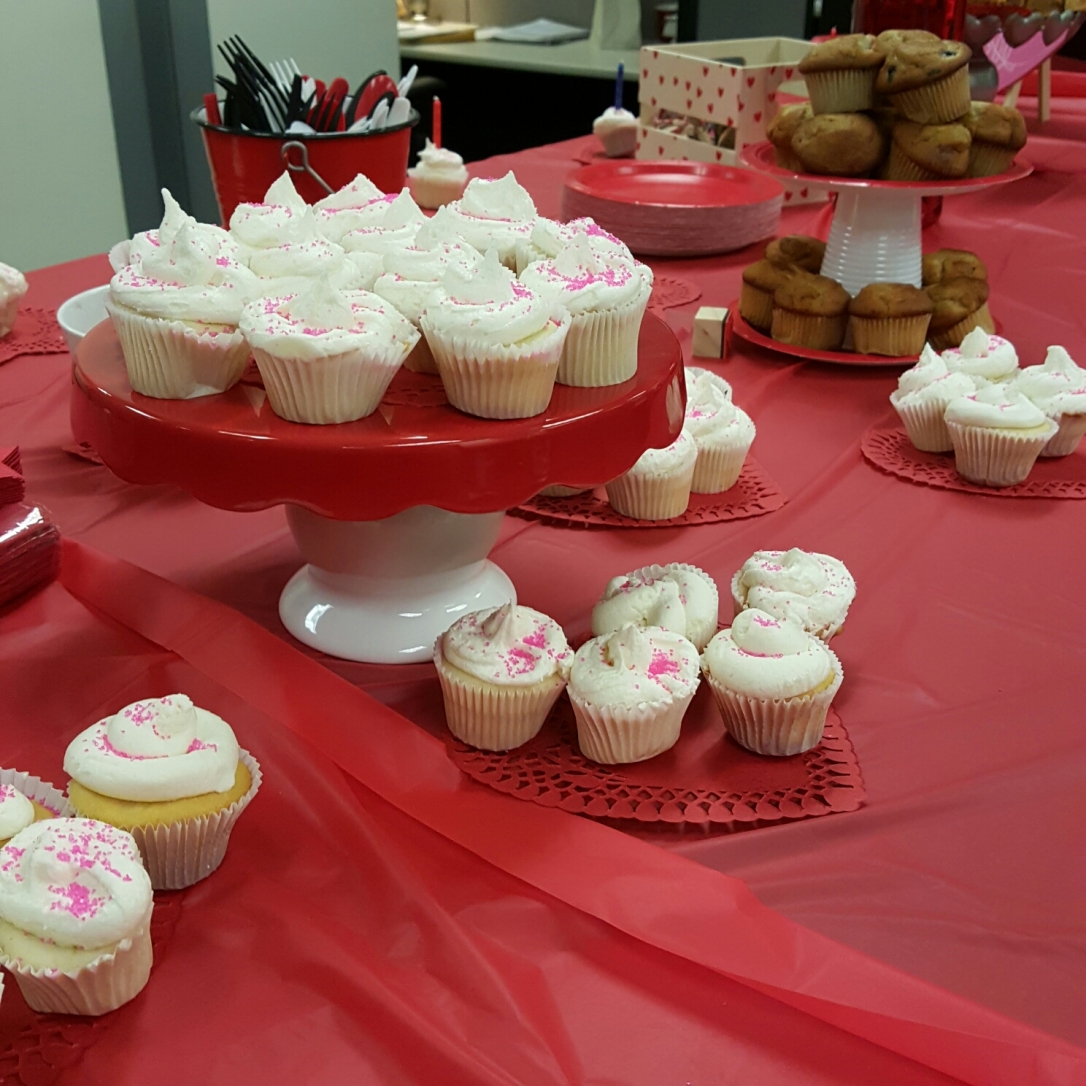 I am happy and grateful for birthday celebrations.

July was a great month filled with many blessings, memories and new experiences. We celebrated the beginning of the month with a bang. Literally, a bang. Fourth of July was fun and filled with the exciting memories of watching fireworks in our own backyard. Soon after, my children and I left for Las Vegas to visit my parents. It was fun to take a few days off from work and spend time with family. We also attended a handful of weekend parties in July. It’s always great to spend time with friends and celebrate. Most of these celebrations included water. Josh loves to swim with his friends. He’s getting better at it. He even taught himself how to dive into the water. What an accomplishment! My daughter took a trip to Washington D.C. and had a great time. I bought my son a big airplane and a scooter and he had a lot of fun playing with them. Because of that, we took many trips to the park and the skate parks.

Here are a few of our favorite things for the month of July, including a few new things that we tried:

A window seat on a plane– My son Joshua, has been on a plane a few times already. Ok, maybe just three times. The first time was when he was a year and a half. The two of us took a plane to Las Vegas to visit my parents. He had a window seat and he loved the experience. He especially enjoyed having a snack and a cup of soda. The second time was when we went to Hawaii. He really wanted a window seat, but unfortunately, he never got it. This month we took a plane ride to Las Vegas to visit my parents. I didn’t feel like driving and the plane ticket prices were affordable, so we did it. Josh didn’t get a window seat on the way to Las Vegas. He was pretty bummed about that. However, on the way back home, he got a window seat! He was so excited! He narrated everything that he saw to me. He even asked me for my phone so that he can take a video.

A trip to Las Vegas- Our main objective in going to Las Vegas was to visit my parents. But while we were there, we did a lot of fun things. First, we tried rolled ice cream. My daughter had this last year in Thailand and it’s now a big hit here in America. I thought it was fun to watch it being made and I was amazed that I actually stood in line for 45 minutes just to try it. We also spent some time at the Red Rock Hotel. We went swimming and played some games at the arcade. Josh’s favorite parts about going to the hotel was watching a movie (“Wonder Woman”)  late at night. He liked it because it was after midnight when the movie was done and whenever he stays up really late, he feels like a grown up. He also liked taking a bubble bath at the hotel room while watching T.V. which was right above the bathtub. Most of all, we enjoyed spending time with my parents. My mom taught me how to make biko. She also taught my daughter how to make chicken adobo. My kids had fun looking at all the photo albums filled with old pictures of their grandparents when they first got married and their mom when she was a little bitty baby.

Dragon Puffs nitrogen covered ice cream cereal balls- One Saturday, we made a plan to visit my aunt, sister, niece and brother at an ice cream shop. My son kept saying that he didn’t feel like eating ice cream. I told him that he can just share with me. When we got to the shop, I saw that they were selling Dragon Puffs which is nitrogen covered ice cream cereal balls. I had never heard of it and thought it would be fun to try it. I thought it would be ice cream but basically it’s cereal balls covered in liquid nitrogen. When you get your cup, it’s “smoking” and when you put one in your mouth, smoke comes out of your mouth or nose. This brought a gigantic smile on my son’s face. What a treat.

A big airplane and a new scooter- My son had a lot of fun with his big airplane and scooter. He loves making paper airplanes, so a big foam airplane that glides far and high was tons of fun for him. We threw it around while we were in the front yard, but he wanted to go to the baseball field and really throw it around. That was fun. With his new scooter, we went to a couple skate parks, an indoor one and an outdoor one. He had a great time going on the ramps. He said he wants to be a pro and when he makes his million, he’ll give half to me and his dad. He said that he hopes to make 2 million, so he can keep a million for himself. Dream big, son.

Ah, Pinterest. So many great DIY ideas. They make it look so easy. Here’s a short story of what I consider a Pinterest fail. Ok, maybe not so much of a fail, but my cake and cupcakes certainly did not turn out like the picture on Pinterest.

I love to bake. However, I’m not too good in the decorating department. When I frost cupcakes, they look sloppy. I just don’t have that magic touch. Maybe I’m a perfectionist when it comes to these things. Or maybe I don’t have the right tools. I didn’t use a tip on my decorating bags for frosting these cupcakes.  I had one that I’ve used a few times, but I lost it. I thought that I would do okay without one. I found out later that you need to use a tip for greater control of the frosting. Lesson learned. So onto my story.

I don’t have a dome cake mold but I found out that you can use a glass bowl. If it says Pyrex on the bottom of the bowl then it is oven safe. I had 4 sizes to choose from and I chose the smallest one. I greased up my Pyrex glass bowl very well so that the cake would slip out easily. In total, I baked the small cake for 26 minutes.

Baking the dome cake in a small Pyrex bowl worked out great! The cake slipped out easily. I leveled the bottom of the cake so that it would be even.

I let the cakes cool. While they cooled, I prepared the frosting. I used about 7 to 8 drops of food coloring for each of the colors which were red, blue and yellow. I wanted the colors to be bright.

As you can see the frosting came out pretty sloppy. But then again, I’ve never been good at frosting cupcakes. Practice makes perfect. Next time I will make sure to use a frosting tip for better control. I think the blue, red and yellow colors came out nice. If I knew how to frost cakes so that they are smooth, then the little beach ball cake would have looked better. I was told that they looked great, but I know I could have done better. I must say, they tasted delicious!

The birthday boy made the cupcakes look so much better! 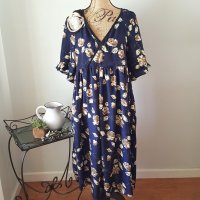