For this cupcake, I think the secret is the buttermilk.  It uses one cup of buttermilk which makes the cupcakes so moist and fluffy.

Even though buttermilk has the word butter in it, buttermilk does not contain butter. It is the liquid left behind after churning the butter out of the cream. The way that buttermilk is made these days is by heating milk with active cultures. These cultures convert some of the lactose in the milk into lactic acid. Under these acidic conditions, the milk proteins are not very soluble… so they clabber. Clabbering is when milk thickens or curdles into a yogurt-like substance with a strong, sour flavor (AKA a tangy flavor).

The tangy flavor in buttermilk is actually quite pleasing in most baked goods, especially cupcakes.

In addition, the acid in the buttermilk aids in the baking process.

So enough food science and onto the recipe!

Here’s what you will need to make this delicious batch of cupcakes:

2 ½ cups of all purpose flour

2. In a bowl, whisk together flour, cocoa powder, baking soda, and salt.

3. In another bowl, whisk together the buttermilk, red food coloring, vinegar and vanilla extract.

4. In a large bowl, beat butter and sugar with an electric mixer on medium speech for about 3 minutes until fluffy.

5. Add the eggs, 1 at a time, beating after each addition.

7. Divide the batter evenly among the paper liners, filling each halfway.

8. Bake for about 25 minutes- until toothpick inserted in the middle of the cupcake comes out clean. Let cupcakes cool before putting on frosting.

On a side note, I made these cupcakes for a “Breakfast at Tiffany’s” themed baby shower. I didn’t use the frosting recipe that goes with the cupcakes. Instead, I used store bought cream cheese frosting and I added 4 drops of blue gel food coloring. My goal was to make the color look as similar as possible to the Tiffany blue color. I mixed the frosting and the food dye well. Once the cupcakes were completely cooled, I frosted them. To keep with the theme, I used white cupcake liners and I added white sugar pearls on top.

Baking is fun. Learning the science of baking is even more fun! Enjoy making these delicious buttermilk cupcakes.

“Let’s face it, a nice creamy chocolate cake does a lot for a lot of people; it does for me”.

My family and I attended the First Annual Cristy’s Pride Fundraiser on October 15, 2016. Cristy’s Pride is an organization which provides tutoring and nutrition to impoverished countries and communities. Below is the speech that was written for this event. It was written and given by Sabrina Shahawi, Cristy’s sister.

First I would like to start off by saying thank you so much for coming to our first ever annual fundraiser for Cristy’s Pride. As many of you may know, today is Cristy’s birthday and she would have been 28 years old. What a great way to celebrate her life by holding this fundraiser which was started in her honor.

I would like to start off by talking about Cristina. She was a daughter, a sister, a niece, a cousin, a friend and a very special person who made a positive impact on every person she touched while she was present on this earth. For those of you who weren’t able to meet her, know that she had a heart of gold. She sincerely cared about everyone. It was her mission to make someone’s day, week, minute and life better.  Just this past weekend, her college sorority held their annual walk in her memory. They held this walk to raise money for the scholarship that they created in her honor. It is truly amazing to see how her memory continues to live on even when she is no longer with us in the physical world.

We first founded Cristy’s Pride in 2013, the year that she passed away. Prior to her passing, she was working towards a career as a teacher. Specifically, she wanted to work as a teacher to low income areas and to offer free tutoring to her students who wished to advance their knowledge, but whose families did not have the means to do so.

We founded this organization in her honor to continue the work that she was doing here on earth. I am so happy to say that we are now serving over 400 students, across 6 different schools in our tutoring centers located in Barranquilla, Colombia. Our organization aims to prevent children from dropping out of school by using innovative teaching strategies to tutor them in mathematics, reading and writing. We work towards empowering them to reach their highest potential and to raise their self esteem in order for them to achieve their goals and dreams.

The children whom we are serving live in very poor conditions. Many of them do not have shoes and have to share their shoes with their siblings. In Colombia, schools are separated by morning and afternoon sessions. So some children go to the morning session for school and then run back home to give their shoes to their sibling so that they can attend the afternoon session of school. Since they need to go home to give their shoes to their sibling, they cannot attend our morning tutoring sessions. Today, your donations will go towards new shoes so that these children can go to school and go to tutoring. They will also go towards backpacks, school supplies and tutor funding.

We are hoping to expand our organization in either Tijuana or San Diego this upcoming year. It fills me with such happiness to see all the support present here tonight. From the bottom of my heart, I truly appreciate everyone for coming out and supporting an organization that means so much to me and my family.

Today I am grateful for helpful people and the ability to help others.

Today and everyday… I am grateful for FAMILY

These White Wedding cupcakes are so delicious! So moist and so smooth. I found the recipe for these white wedding cupcakes on Recipegirl.com for both the cupcakes and the frosting.

The ingredients, in addition to the white cake mix, are flour, sugar, vanilla extract, egg whites and sour cream. It is definitely the sour cream that makes the difference. The cupcakes are basically doctored up white cake mix, but they are delicious!

1. Preheat your oven to 325°F. Place cupcake liners in cupcake pans. This recipe makes 36.
2. In a large bowl, whisk together cake mix, flour, sugar and salt. Add the remaining ingredients and beat with a hand mixer for 2 minutes, or until well blended.
3. Fill cupcake liners with batter about ½ full. Bake about 18 minutes, or until toothpick inserted in center comes out clean.

The frosting is just 4 ingredients.

1. In a large bowl, cream together sugar and butter on low speed. Mix until well blended.Add the powdered sugar and increase speed to medium and beat for another 3 minutes.
2. Add vanilla and cream and continue to beat on medium speed for 1 minute more, adding more cream if needed.
3. Scoop into a piping bag and pipe decoratively onto cupcakes, or spread onto cupcakes.

I added sliced almonds on some of the cupcakes and they made the cupcake even more delicious.

Today I am grateful for sharing good times with good friends. 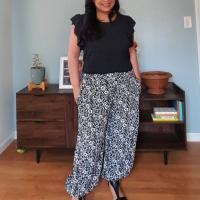 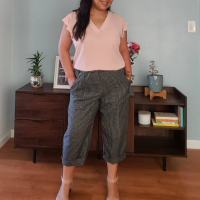 I thought I was in a sewing funk but I guess I'm slowly getting my mojo back. I've been focusing on bottoms with elasticated waists since they're fairly "easy" and I'm able to encourage myself to work on it. Plus, sewing is my therapy and creating helps me feel better (bye, bye, bye funk)... I finished this pretty pair of black and white floral pants. They're super comfy. I feel like I'm wearing PJ bottoms. Now those are my kind of pants! 👖
✔#MeMadeMay garment complete 👖Cropped pants with cargo pockets. Elasticized waist with casing using one inch wide elastic.
My #MeMadeMay mother's day outfit for today. Enjoyed the day with flowers and a mother/son activity of making chocolate covered strawberries 🍓 and chocolate chip muffins.
Wearing a #memade today for #MeMadeMay. I've been in a little bit of a funk and lost my sewing mojo. But I encouraged myself to make something simple. I made green linen shorts with pockets. I used a fabric I had leftover from a dress I made. They're comfortable and perfect for Spring. I think I got my mojo back 🔥
#mccalls8084 #liviamccalls
I made this last year. It's a romper turned into a dress. I didn't succeed in installing the invisible zipper so I decided to take the zipper out. I sewed the front seams together and did some research on how to turn shorts into a skirt. It was pretty easy and the dress turned out well. And the best part? It has pockets…